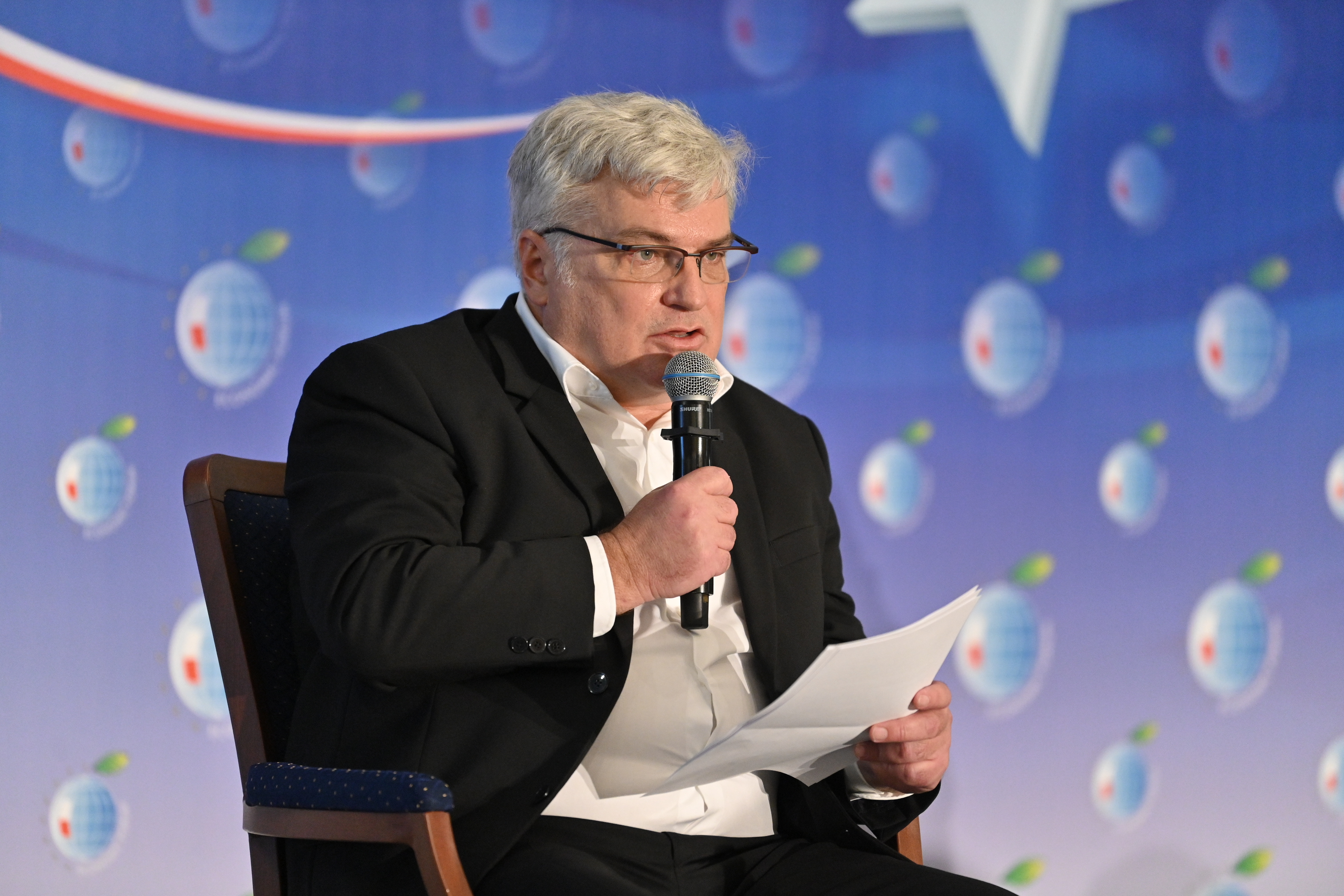 Firstly I would like to thank the Polish Parliament for its invitation to the Europe of the Carpathians Conference. I would thanks especially Mr. Ryszard Terlecki and Mr. Marek Kuchciński and the staff of the Chancellery who helped me to prepare my coming from France.

I’m the President of the European Federalist Party (EFP). Of course, my movement is not comparable to the political formations that sit in national parliaments and in the European Parliament. About EFP I would rather talk of an experiment both political and sociologic.

The idea was to create a pan-European political movement with a single programme and to participate in the European elections in 2014. We wanted to find out if the European citizen really exists. In this way, we managed to present electoral lists in France, Belgium, Austria, Italy and also Greece. It was an exciting experience and our movement still exists and often run for elections with the same goals.

Today, the title of our debate refers to the divisions within Europe.

Certainly, last years, Europe faced serious crises and different points of view on its future have emerged.
1° For example, the migrant crisis in 2015 revealed tension between East and West on the subject of the relocation of the refugees.
2° This year few months ago during the negotiations of the ‘coronavirus recovery fund’ the so-called ‘frugal four’ 4 Northern countries were at loggerhead against Mediterranean countries.

But I think despite of all these events, there are more things that fundamentally bind Europeans together than things that divide them.
And I think the European project is still solid.

As far as I’m concerned, I support the federalist idea, because I think it’s time to move towards a stronger European integration. It is not a question of giving Europe all the powers of a state, or to create a ‘Super state’ that will supplant the founders.

Now, the European level must provide to current problems new answers that are both sustainable and guided by the principle of subsidiarity. In other words, Europe must carry out missions that the States cannot do themselves.

Today, these missions are concrete and identified.
1° Firstly, one of these missions is to complete the Euro. Everyone agrees that the euro is a protective currency, but not a growth currency. It is therefore a question of completing the architecture of the euro by creating a treasury and a European budget that would make it possible to carry out major missions in the service of Europeans, such as investing massively in research into a vaccine to combat the coronavirus pandemic. The USA did it recently with an 8 billion US dollars budget (against only 47 million for the EU).
2° Another example is to make safer the external borders of the European Union. In 2015 our external borders have not been able to resist the migrant crisis. And this had serious repercussions on free movement in the Schengen area. Logically, many States have closed their internal borders. As a result, economic exchanges have been partly disrupted. In this case, for the Federalist activists it’s a question of moving from cooperation between member states (the Frontex program) to the establishment of a permanent corps of European border guards.

I understand that these major steps could frighten some governments, anxious not to give up sovereignty. So I think a confederal step will be the solution to achieve the necessary projects for a good functioning of Europe.

Why a confederal step? Because from a legal point of view, there is an important difference between a federal and a confederal structure.
In the first case – the federal one – we are dealing with a constitution, a sovereign state is created. In the second case – the confederation – we are dealing with a Treaty. The States remain sovereign. This is the case of the EU. The Brexit has proved that a state has the possibility to trigger the article 50 and unilaterally withdrawing from the Lisbon treaty.

The interesting thing about the confederal process is that the confederations can go very far in exercising sovereign powers. They can create a single diplomacy or army. In the past, this has been the case for the United States, Switzerland or Germany. To be clear, I would quote Robert Redslob: the confederation prepares the federal state, which appears to be its consolidation.

But a federal structure is a historical act and not a legal act. This cannot be the creation of governments. Governments only can bind their states by treaties. The federation is a creation of the people. It requires, on their part, adhesion and consent.

In my opinion, this is why Spinelli’s federal project for Europe could not be carried out. 70 years ago, the European construction concerned only an elite and was not supported by any population.
Today it’s different, the European question has entered the public debate and is widely discussed by Europeans. On this subject, I would like to give my testimony because during our electoral campaigns, we dialogue with European citizens.

Our objective is to know:
1° if a true European feeling exists among the European populations.
2° if at the grass roots level a majority of citizens were opposed to any European construction, as the mainstream discourse claimed.

The results of this experiment show that the opinion on Europe is ambivalent. A mix of acceptance and rejection.
First example, in the euro zone the attachment to the European single currency is very strong. This is confirmed now by Eurostat surveys. One of the political consequences is that in France, the main sovereignist party no longer talk about an exit from the Eurozone.
We also noted a great demand for Europe in all social classes:
1° a strong desire for an autonomous European defence, 2° a protection of external borders, 3° an increased fight against terrorism, with the creation of an « European FBI » 4° and of course a great expectation in an ambitious Green Deal.
For me, these demands are motivated in part by an awareness of the fragility of our European states in the face of American and Chinese omnipotence.

But if the attachment of populations to the fundamentals of a protective Europe is still there, support for EU membership is increasingly being called into question. The criticisms are well known: to much technocracy, European policies are too economically oriented, the weight of lobbies in Brussels…

The EU is also criticised for its relative ineffectiveness in improving policies such as employment, taxation, immigration, social protection, etc. When demands are not met, the feeling of rejection is reinforced.
For the people, the desired Europe is not necessarily reducible to the EU, its institutions and the Treaty of Lisbon. For many people, giving Europe sovereign powers is beginning to become a matter of course.
I think, this may give new impetus both to the confederal and the federal options for the future of our continent.

In conclusion I would make the following remarks
1° One of the problems with the European current status quo is that there is no leader and little willingness to launch new major projects. The last one was the Euro, it was 28 years ago, when the Maastricht Treaty was signed. Certainly, there are many recent advances – such as the coronavirus recovery fund – which are to be welcomed. But we have the impression that these agreements are guided more by the need to urgently resolve a problem rather than by the desire to move forward and outline ambitious prospects for Europe.
2° To move forward, the projects need to be backed by our fellow citizens. But it’s difficult to have their full support because many believe that Europe has fostered the richest and penalised the poorest. Social justice is a key element of our future.
3° Finally, Europe is regularly divided and the States are not advancing at the same pace in its construction, which will undoubtedly require pioneering groups to move forward.

But I still believe in a united Europe, because Europeans share a long history, common roots and always show solidarity despite the difficulties.

Thank you for your attention.